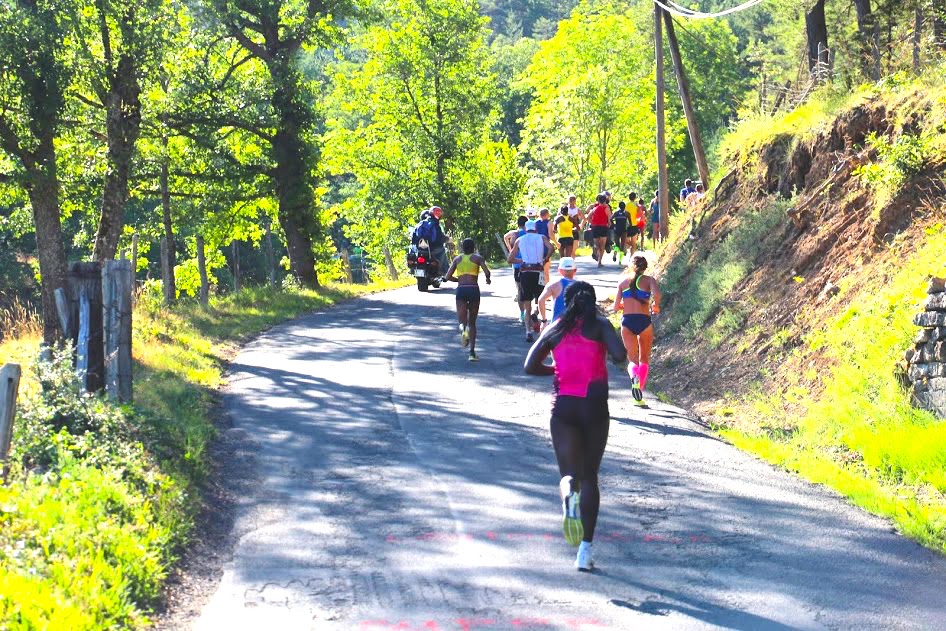 Sunday July 23rd   Since the beginning, the children are at the center of the legendary race of the Marvejols-Mende ! From the 1st edition, the youngsters came forward and helped the success of the race....

The Marvejols-Mende half-marathon is now considered like one of the best races in France, and its renown crossed many borders. People happily come back massively to this event. The landscapes, the great atmosphere all race long, the friendships, the Sunday night fever, there are all the ingredients so that sport becomes a celebration above it all.

More than 5000 road race-lovers coming from all over the world and across the country, some young and some less young hit the winding and sloping roads for 22,4 kilometers in the midst of Lozère’s beautiful scenery.

For the entirety of the race, some musicians, dancers and many volunteers (more than 550) are there to cheer you on. This support will be much needed with the two mythical sloping passes.

♦ In the direction of Pont des Ecureuils

Starting from Marvejols (height 634 meters/ 2080 feet), you hit the road at precisely 9AM from the Esplanade. After a few minutes of race, you can find people all around the route… 5 kilometers of false flats and 5 kilometers of uphills slopes will lead you to the first food supplies right above the the Pont des Ecureuils (height 693 meters / 2290 feet).

We often say that at this exact moment, « the torment begins ».

Next, the third food supply is about 1,5 kilometers away in the col de Goudard (height 1018 meters / 3340 feet). After these 9 kilometers of race, you’ll be amazed by the majestic scenery before your eyes.

Then begins the 4,5 kilometers of descent to reach the Planchette (height 688 meters / 2257 feet).  The first kilometer heading for the Valcroze hamlet is particularly tiring because of the zigzags and a slope with a gradient reaching more than 15%. It’s also around there that you’ll find yourself surrounded by racewalking contestants.

At that moment, there’s only 500 meters left before the Planchette intersection (in the direction of Barjac-Mende) where you’ll find the 4th food supply of the race.

It’s also at this place that you’ll meet back with civilization since a large public is usually standing by this intersection.

For the last shaded area of the race (in case of beautiful weather), you’ll need to run on a 1,5 kilometers false flat to reach the Briquette food supply (height 700 meters / 3000 feet).

Right after that begins the slope towards the Chabrits hamelt (height 960 meters / 3150 feet), where is located the 6th food supply. Once you’ve passed this point, the race continues with a false flat that leads you to Mende (at the Boulaines intersection). After this roundabout, you’ll go down for about 3,5 kilometers in a wide avenue.

♦ The end of the race

The Mendozère intersection, the Foch Avenue, the Aïgues-Passes roundabout, the Henri-Bourrillon boulevard, and then the finish line is getting closer, the public is all around the place to support you…

If it’s your first time competing for the race, we recommend that you identify the route the day or the week before.

The 48th edition which was to be a big celebration, is postponed to Sunday July 25, 2021.Our concern was first to notify registered competitors and... Read More "The 2020 edition of Marvejols Mende will not take place"
48th winter edition ! 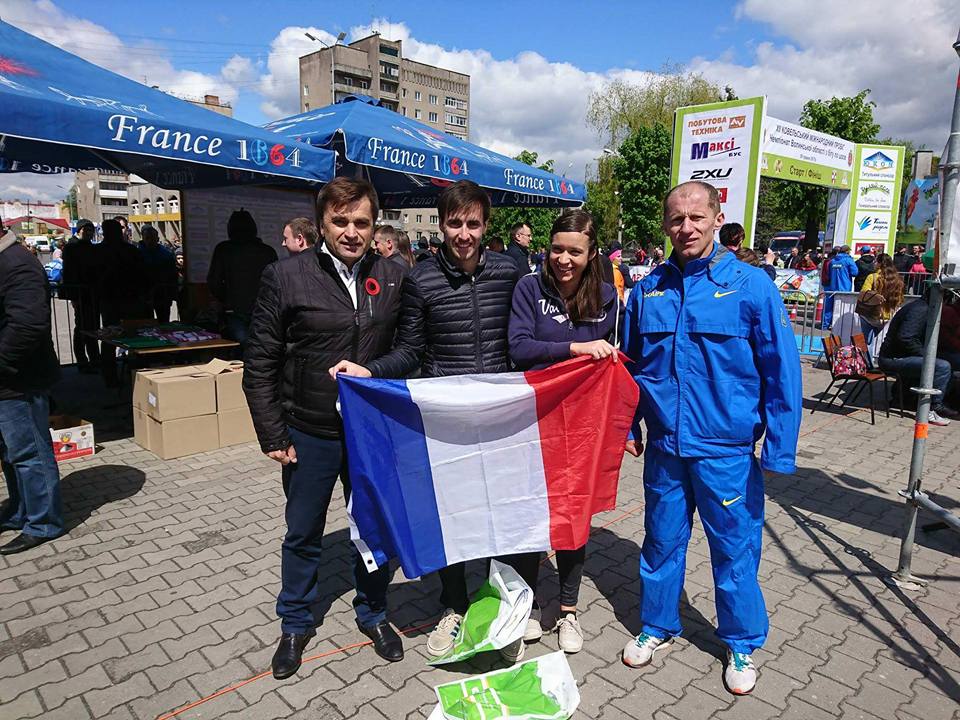 The 48th edition which was to be a big celebration, is postponed... Read More "The 2020 edition of Marvejols Mende will not take place"
48th winter edition !

Jean-Claude Moulin was one of the precusors of road racing in France, helping the overwhelming rise of this trial as soon as in 1969. With his friend Begnatborde and the Boudet brothers they created in 1968 « Les Courses de Café » (the Coffee Races) and « Le Tour de Mende » (Mende’s run around/Round), open to all, both men and women, by inviting local runners.

« The 25th of December 1972 » the four cheerful chaps/the four of them find themselves on the Esplanade of Marvejols to reach Mende. Almost incognito, they passed through the steep slope of Goudard, the Valcroze descent covered in pebbles, zigzags of Chabrits’ roads, and… the Christmas Turkey. »

They found the route : the race they had dreamt of would take place on the picturesque roads of Lozère. Jean-Claude Moulin and his group of friends had decided:  the « Marvejols-Mende half-marathon » was born.

It will take place during the summer: it will be a very warm race welcoming all running lovers.

Although, they still had to organize it and above all, they had to go through many of the regulations which did not anticipate the kind of race that occured close to the population and outside of the stadium…

For the first time ever in France: an event was open to un-licensed and to women (which was not the case for the other races back then, like Sedan-Charleville among others).

At that time, and up until 1980, women weren’t allowed to run a distance exceeding 5 km maximum, in the cross country race. Moreover, categories of master (10 years by 10 years) were already included as soon as the first edition, with an awards ceremony which was also a first. This edition was a success for several reasons that Jean-Claude Moulin points out: “We were already organizing foot races, on smaller distances, since 1969, in Mende. So, in a way, we had already figured out and solves some problems. And then, as of 1969, we put together the concept of celebrating before and after the race with festive meals and dances.”

Some of the best French runners of the time were present for all firsts editions (Murat, Margerit, Faye, Moissonnier, Caraby, Alcalde, Kheddar, Bobes, Liardet), as well as many French women who were running at this time: Denise Seigneuric, Dominique Remeize, Chantal Langlacé, Jocelyne Villeton, Viviane Murat, Joëlle Audibert, Fabienne Curiace… Some excellent foreigners  also appeared, mainly through the Spiridon magazine.

.. .the French Federation took umbrage, so Jean-Claude MOULIN was suspended one year, and then they tried to strike him off the FFA for life for the violate of Federal regulations (mainly for allowing women and unlicensed to run).

These twists and turns, from 1973 to 1979, increased the promotion of the race which became a symbol of the fight against the conservatism and obscurantism in this sport.

In 1979, the Ministry of Youth and Sports, created a ministerial commission which will impose on the FFA taking account of races on road. It will of course, call Jean-Claude MOULIN, to set up this Commission which will become the CNCHS and will make the FFA think its regulations over.

The 22nd of July 1973 : The start is given under a bright sun, 153 running enthusiasts would contribute to the construction of a real myth. René Murat (1h21) and Seigneuric Denise (2h07) were the first winners. The event was organised without permission.

After this 1st attempt for which registration and the festive meal were entirely free, the Organization would each year try to improve the to the finest detail. Its ‘Aura’ in the running world grew bigger, and of many “future organizers’ made internships in Mende during the summer to then launch their own race following the « Marvejols-Mende » model : Marseille-Cassis, Paris-Versailles, etc…

The participation record only gets better with each passing year.

In 1978 the Scottish Jim Mouat won and so began the international fame of the Marvejols Mende event.
Dominique Chauvelier will become the first recordman of victories (with five victories under his belt).
This record will be regularly beaten. Luka KANDA (Kenya) currently holds it with a time of 1 h 10’09 ‘ established during the 39th edition, in 2011.
Among women, it is Hafida GADI (ACO Firminy) who achieved the best performance to date, with a time of 1 h 21’48 ‘, carried out in 2004, during the 32nd edition.

This event forms part of the French recognized races at the international calendar. The best international runners are present each year along with the popular ones and the unknown. They come for the race but especially for the spirit that brings it to life. Each last weekend of the year, the fans of the half-marathon meet up to run the Winter Round in memory of the birth of this incredible event…

The 48th edition which was to be a big celebration, is postponed to Sunday July 25, 2021.Our concern was first to notify registered competitors and …

Some figures on this 48th winter edition: 72 participants with 60 arrivals While waiting for the full results the first three men: François Mourgues(LAM Landais) …

First visit of the Marvejols-Mende volunteers originating from Lozère to the Sergey Paniasiuk’s race in Kovel (Ukraine).  Every year, we’re lucky to welcome Sergey along …